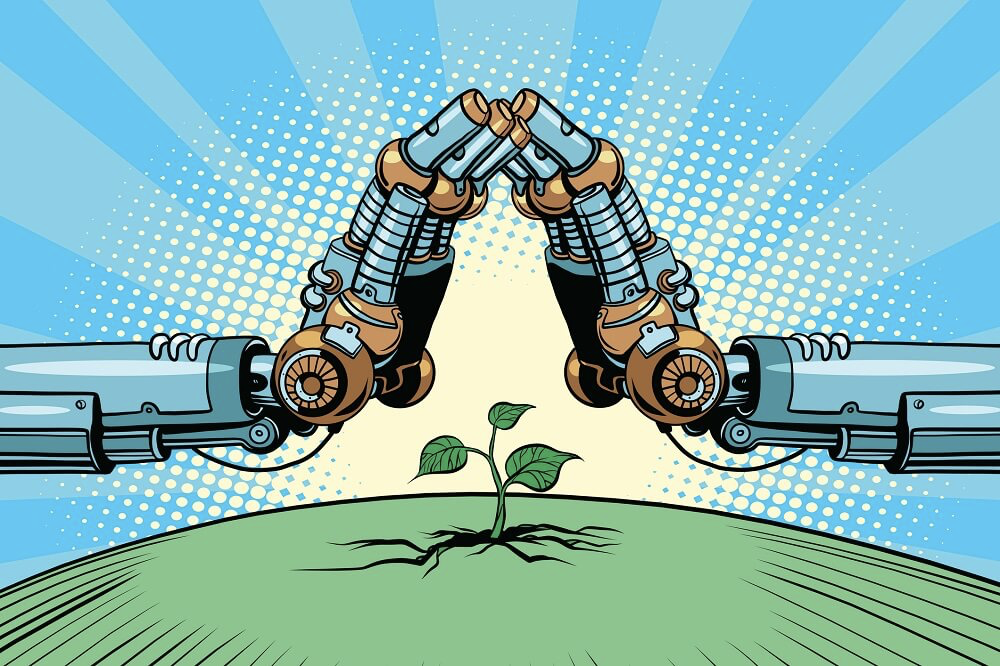 April 22nd was Earth Day, in case your Instagram feed being filled with nature pictures wasn’t enough to catch on. In honor of this, we've focused HTC12 on AI environmental-ethics-related stories — covering various ways that AI can both help, and harm, our planet.

(We considered recognizing a different kind of "green" day that was celebrated last week, but there was a disappointing lack of coverage).

This one goes out to you, mother Earth.

Industrial waste makes up at least 50% of all global waste. This amount is roughly 18 times greater than the amount generated by municipal solid waste (aka “trash”, if you don’t have much time). The complexity of the manufacturing process as well as the global supply chain leads to a lot of waste produced by inefficiencies, mistakes, or a lack of responsiveness.

How AI can help

AI algorithms can be applied to making the manufacturing and distribution process more responsive, adaptive, connected, and efficient, allowing businesses to save money and the environment. Algorithms can be deployed in factories to avoid and automatically respond to costly, waste-generating mistakes, in business to predict supply and demand for various products, and in complex decision-making to help companies find and respond to patterns.

Many big-name companies are working to reduce their environmental impact, including Subaru, Nike, Ford, and Coca-Cola, and AI is already playing a role. French food maker, Danone, was able to use AI to achieve a 20% reduction in forecast error and a 30% reduction in lost sales by using machine learning to predict demand for their products, according to Capgemini.

AI algorithms require a vast amount of computing power to train. This power translates to massive amounts of electricity that go into the development of these algorithms. A paper out of UC Berkeley and Google estimated the environmental impact of the following algorithms:

Google found that environmental impacts can be minimized when the training of these algorithms is optimized accordingly.

Environmental impact was one of the concerns brought forth by Google’s AI ethics research team prior to the departure of Timnit Gebru and Margaret Mitchell. Jeff Dean, a senior executive vice president at Google, is a co-author of this paper and one of the people criticized for their role in forcing Gebru from the company. This paper also underestimates the impact of AI development on the environment when compared to other recent studies.

How Can AI Address Climate Change?

A recently published Forbes article outlines several use-cases for how artificial intelligence can be used to advance climate solutions. The authors even claim that "AI will be a major enabler at the core of climate change technologies."

Here are a few ways AI can help.

Environmental Intelligence has become especially significant for predicting climate trends and patterns that are extreme in nature. Artificial intelligence and deep learning have the ability to quickly analyze dynamic systems and simulate them, producing accurate models that can then be applied by scientists and researchers for more robust decision-making.

Another area where AI is making an impact on climate change is with drone surveillance of forests. Technology entrepreneur Ewan Kirk says that "drones are one of the easiest ways to collect important data from remote regions, and gather intelligence on ecological health."

TL;DR: AI can have really awesome impacts on the ~greatest existential threat~ facing our generation. Here at RAISO, we're eager to continue learning about different use-cases, seeing first-hand how AI can solve some of the world's most complicated challenges.

Weekly Feature: The Future of Reinforcement Learning aka the Self-Taught AI

If you’ve ever tried to train a puppy or taken an Intro to Psych class, you already know the basics of reinforcement learning. It’s the process of learning in an environment that gives feedback or a reward based on behavior, like giving a dog treats bit-by-bit until they learn to roll over. Now imagine AI using this model to optimize businesses.

How is this different from other machine learning techniques?

With reinforcement learning, there is no truth or guideline to follow. In this case, the supervisor doesn’t give them the “right answer” because there isn’t one – the task is too complex. AIs learn by trial and error, doing rather than predicting. So supervisors give the AI a reward if they complete the task, then ask the AI how they got to that goal. From there, they assign value to the right actions.

How is this applied in the real world?

Highlighted in the Harvard Business Review, the technology is now being implemented into business settings. Google uses reinforcement-learned AI to control cooling in their data centers. Spotify uses it to make suggestions for your playlists.

Kathryn Hume and Matthew E. Taylor, head of Borealis AI and associate professor of computing science at the University of Alberta, respectfully, say that businesses should be utilizing this technology in situations where rules and formulas just won’t cut it. If there are tasks that are too dynamic or have too many exceptions, like how to sell stock in small enough orders that minimize its price drop, reinforcement-learned AI can be the solution. Though it may be a large investment, it may be worth it in the long run to outshine competitors.

Read the full story here and watch a video about reinforcement learning here.