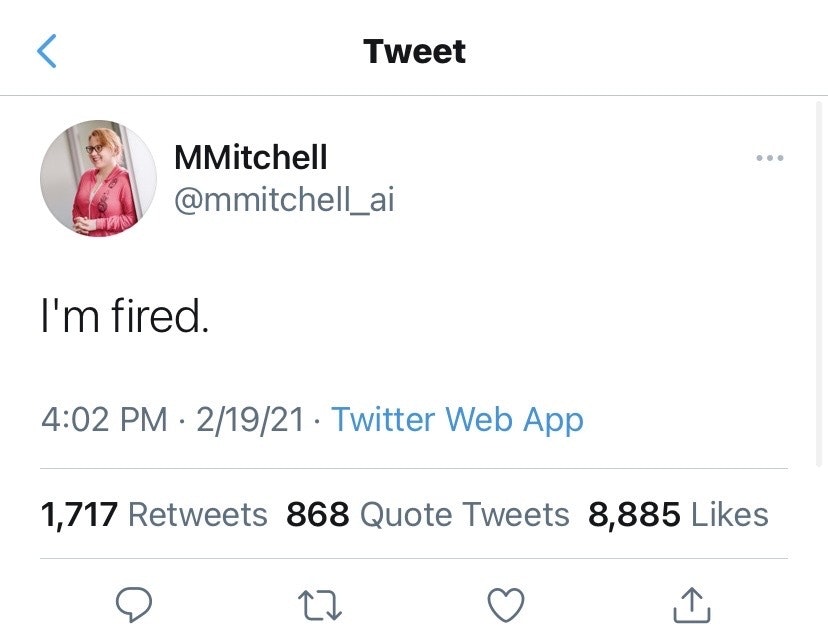 Ladies and gentlemen, it’s happened again: Google has fired yet another one of its top AI Ethics researchers. On Friday, the company announced that they had fired Margaret Mitchell, the founder, and co-head, of its artificial intelligence ethics unit. The announcement comes three months after the controversial departure of Timnit Gebru, another senior figure in Google’s ethics unit.

Why was Mitchell fired?

Google claims that Mitchell violated the company’s code of conduct and security policies, yet there is speculation as to the circumstances and severity of the firing.

What are people saying?

Though many details surrounding the firing remain unknown or vague, this news has sparked a discussion over the function and necessity of AI ethics boards at tech companies, with opinions ranging from some recognizing the importance of evaluating the social effects of AI systems to others viewing it as “a way for humanities types to wedge themselves into a hot, high paying field.”

Users of Hacker News, a social news aggregator that focuses on computer science topics, have had no shortage of opinions on the necessity of AI ethics in the tech industry:

Here at RAISO, we think it is extremely important to understand the social, political, and economic effects AI systems can have on our society. We believe it is vital for people to be educated and think critically about these systems, especially as they become increasingly integrated into our daily lives.

As the reach of AI continues to expand, it is extremely important to develop these systems equitably, ethically, and responsibly.